The Tower of Babel vs. The Paper Towel

Living in such a spectacularly unique Culture where -although days pass by on and on- we still can´t understand how is it possible that the “indiference, unscrupulousness, corruption” in which we were brought up, are replaced here by “honesty, humility, nobility of spirit” as easily as you could exchange rise for bread…, our first question is…

-…Which planet did these slant-eyed people come from?

And then…; –“How could they keep their essence so pure, surviving the globalized flood of  disposable moral values?”

Probably the fact of being an Island, where you don´t get so easily, and even more; overshadowed by the oversized land mass of huge countries like Russia, China, etc, may have contributed to keep this friendly paradise well hidden and safe from the Mutant Western Contamination…

But I also believe that one of the main barricades that have served as an Impenetrable Fortress to safeguard the entrance into the Kingdom of Kindness and Elegance, has been no less than their eccentric language… which eventhough at first sight may seem a little difficult, as long as you start going deeper you realize it´s completely unapproachable!!!

To put it simpler, let´s say “Nihon-Go” (that´s how you say “japanese” in “japanese”) has about 2 or 3 basic gramatical rules and 4 or 5 millon exceptions!

It´s so amusingly frustrating to see how impossible it is to try any kind of conversation (no matter how simple it is) that goes beyond the “Konichiwa, Genki Desuka, Arigató” (Hello, how are you, thank you), that you immediately grasp why this has worked as an invisible electromagnetic fence to scare away any stranger that could intend to mingle with local affairs, keeping far from their essence and tradition anyone who wasn´t part of this parallel Universe from the roots.

Nevertheless, when you fall in love with the Beauty of the Japanese Culture… (or with a beautiful Girl that happens to be Japanese!), one of the first limitations you try to overcome in order to deepen into her (always talking about the Culture) is obviously the language barrier…

At that point I where I find myself right now, and in case you have ever felt that intrepid curiosity about this exotic idiom, here I share my first baby steps, so we can walk together this passionate learning road, and who knows, may be one day life surprises us toasting with a Sake* and chanting in unison “かんぱい” /Kanpai/ (Cheers!)

*Sake: Legendary Spirit Local Potion with which -before going to sleep- we culminate every happy day while philosophizing around a small friendly table that lies almost level with the ground…

If you feel ready to start together this great adventure; the first thing you must do is grab a pen and paper, and write one hundred times:

Once we agree it´s of our own free will that we jumped into the abyss of bewilderment and confusion, everything will start to taste much better (almost like Sake.)

The second step we have to take is completely forgetting about any kind of comparison with our own linguistic code, since from the very beginning we start from such distant and divergent points, that any attempt of matching them will only increase our puzzlement

Having said that, the 27 tiny letters of our modest alphabet have to kindly move aside, in order to give way to the Honorable Nihon-Go, which, to begin with;

is based on THREE independent ALPHABETS:

*The last one has two reading modes;

Each mode may have up to 3 or 4 different sounds and meanings assigned -it depends on the context-. That is to say that the same Kanji may mean 7 or 8 things at the same time!!! (Now we understand why nobody comes here!)

But let´s start from the easy side:

Hiragana and Katakana are formed by 46 characteres each, resulting in 92, some of which are combined between them to generate 72 more (36 in Hiragana and 36 in Katakana) ending up in 164 fonetic units, each one represented by a different glyph, that we should memorize if we intend to start organizing the sonic chaos we hear all around…

Once we´ve understood the basic structure of the 164 main phonems (some of which share the same origin until you end up adding some kind of quotation marks on the right –that obviously won´t give the same meaning if inserted horizontally or obliquely-, and although our desperation for organizing this symbolic hurricane makes us want to grab a ruler before writing every letter, actually the daily use of the language (to which you are impelled since in Japan people only speak Japanese!) will make it naturally easy for us to improve our skills gradually, and -as long as we are commited and dedicated- in about 3 or 4 geological periods we´ll be speaking it fluently…

But watch out! Before going through our next lesson, let´s not forget to mention the 3rd and main Hieroglyph Compendium, the one about the graceful “Kanjis” 漢字, which literal translation is “Chinese Character”, since it was during one of those migratory waves around III Century a.TM.  (after The Magi) that -with ideograms coming from that region- the legendary “Yamatokotoba” language started to be written, becoming what we now know as “Japanese”.

If 164 Hiragana and Katakana characters seem too much for one lesson, may be we should leave for another day the study of the Kanji Code, which is said to have more than 50.000 singular characters!!!!

But don´t Panic!!! We don´t need to learn them all! To manage in daily life, it´s enough to handle the “Regular-use Kanji List”  常用漢字 /jōyō kanji/  dictated by the Government, that only includes about 2150 (Easy peasy, isn´t it?).

But let´s hurry up! since every year they slyly add some 1oo more!!!

Here it comes one of the funniest and most amusing parts… If we find Kanjis subject attractive, it´s interesting to note that each of them does not only correspond to a “single sound”, but to a whole “Concept”. So, for example “ 木 ” /Ki/ means Tree, but three of them all together “ 森 ” /Mori/ mean “Forest”, five of them mean “Jungle”  “森林 ” /shin-rin/ and so on in an astonishing fractal combination at which some characters tend to devour some others just like a holographic pac-man, resulting in such an intellectually sensual and hypnotic language…

Although it can also turn dangerous!!! Be aware that asking about the location of that neat park with 5 little trees on it, you could easily end up in the Amazons!!!

Regarding their difficulty level, they are classified by “strokes” (amount of times you should raise the pencil in order to complete each one). We start with the basics with 1, 2 or 3 lines, and we get to those that hopefully we´ll never need to use, since to fully write them we´d need to draw up to 29 strokes!!! -what could be so difficult to express ?!!-

Fortunately they don´t come around so often,

so let´s learn a easier one!

I guess I´d rather ask for delivery

In order to relax our mind a little bit and finishing our first lesson (on the 2nd one I promise to focus on the questions you may pose on the comments section at the end of the post), I´ll add that there are two speech modes or tones, the “plain” or casual and the “polite” o respectful. Instead of saying exactely the same but adding a “please” or “thank you” at the end, in the actual version of the ancient “Yamatokotoba” we´ll have to change the whole sentence if we want to switch from one mode to the other. Also surprising is that they mainly use only 2 verbe tenses:

And it´s so interesting that the “non-past” merge together our concepts of “present and future” in a single dimension ! May I guess that in a country that moves forward at the speed of light where each day lasts one second, the march is so unbelievably fast that it´s almost indistinguishable what will one day happen, from what may be already happenning right now…

This gives us -students- a positive boost, since “I will one day speak Japanese perfectly”, can also be said “I speak perfect Japanese”! jajaj

Last but not least, instead of getting overwhelmed with the 50.000 Kanjis and their multiple interpretations, the plain and polite modes, and the 96 characters that result in 164 splitted in 2 alphabets, I´d rather start by the 3 main concepts already mentioned at the beginning.

I truly believe that exercising our “Honesty, Humility and Nobility of Spirit” that here float in the air and you don´t need to write 100 times nothing to achieve them…, all the rest will come as a bonus track…

Inviting you to share this enlightening path while I practice the most commonly used word; 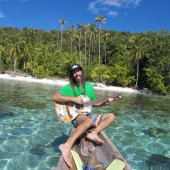 Every day is a new adventure... Our main occupation is to enjoy the Great Presents of the Universe ... All that´s happenning Right here... Right Now...

My best “Surprise Birthday Party” Ever !!!

The Happiest Country in the World !!!

At school they taught me how to draw the country borders… My dad is teaching me how to delete them!!!